Nashville, Tennessee Sept. 18, 2015 – BRP takes performance riding to the next level once again with the introduction of the new 300-hp Rotax 1630 ACE engine in the 2016 Sea-Doo RXT-X 300 and RXP-X 300 and the integration of the race-proven Ergolock seat on all RXT models.

You can also pre-order the new models here:

The new Rotax 1630 ACE engine is bigger, more efficient and delivers more power with a boosted 300 hp, becoming the most powerful engine ever produced by Rotax. The Rotax 1630 ACE has a longer stroke compared to the Rotax 1503 and features a new supercharger with a faster spinning 32-blade wheel producing 30% more intake boost. Adding to the power producing efficiency is a re-engineered cooling system that is improved by 33% in part from an additional heat exchanger and more efficient engine oil cooler. New ignition curves have been developed to efficiently match the increased air boost with the output of the larger fuel injectors leading to a 15% increase in horsepower and the industry’s best power-to-weight ratio in the 2016 RXP-X 300 model. 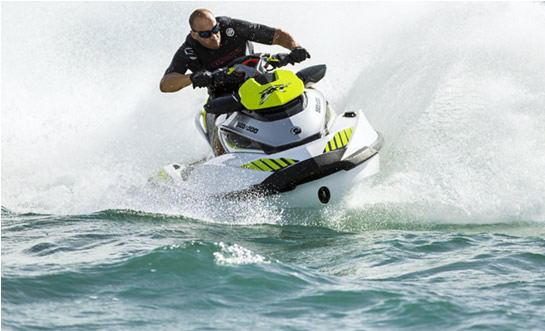 This new engine also features a new plasma coating technology for aluminum-block engines developed by a Rotax team in Gunskirchen, Austria. The plasma coating technology is a thermal spraying process that deposits a protective coating on engine cylinder liners to create a metallic layer that provides a hard and durable surface to withstand piston friction forces. It improves surface durability, while keeping the engine lighter and more compact with better heat transfer and superior performance, and reduced use of chemicals.

The race-proven Ergolock seat is now available on all RXT models for 2016 and allows riders to hold onto the watercraft better by using their stronger leg muscles to squeeze the narrower seat, thus improving control and reducing upper body fatigue. The 2016 Sea-Doo RXT-X 300 receives the complete Ergolock system that includes the narrow Ergolock seat, the Adjustable Ergonomic Steering (A.E.S.) handlebar and the angled footwell wedges for more rider comfort and control.

All 2016 Sea-Doo performance models will be equipped with the second-generation iBR that improves on the industry’s first, intuitive braking system with a more responsive activation. The new iBR reduces the stopping distance by close to 48.75m  sooner than deceleration without braking. The Sea-Doo iBR system is the first and only braking system recognized by the USCG since 2009 for contributing to recreational boating safety and is now even better with a stronger gear drive motor and larger, reengineered brake gate. The iBR system adds to the rider centric design approach providing maximum control in all conditions. The 2016 Sea-Doo performance models also include race-inspired features such as high-performance Variable Trim System (VTS), increased storage capacity on RXT models, new handlebar grips with palm rest and race-inspired coloration and graphics.

2016 SEA-DOO RXT-X 300
The combination of the increased power and efficiency of the new ROTAX 1630 ACE engine with the advanced ergonomics of the Ergolock seat deliver a confidence inspiring ride allowing you to push your limits even further on the 2016 Sea-Doo RXT-X 300. The 300-hp Rotax 1630 ACE engine delivers more torque providing more mid-range power to help maintain momentum when riding through heavy chop where the jet pump is continually reengaging the water. The new power package provides greater throttle response in all conditions and is the most powerful engine ever offered in a Sea-Doo watercraft.

The RXT-X 300 model also benefits from the learning’s of the recent Sea-Doo closed course racing success as the race-proven Sea-Doo Ergolock system of the RXP-X has been adapted to this model. The system allows the rider to connect with the watercraft better and use his entire body to hold on rather than only the upper-body, thus improving confidence and reducing upper body fatigue. The narrower, body-molded seat, Adjustable Ergonomic Steering (A.E.S.) handlebar and angled footwell wedges, have proven to benefit in aggressive cornering and are equally beneficial in connecting the watercraft in choppy, open-water, straight-line riding. The added ability for the rider to feel better connected to the RXT-X 300 delivers better control and less fatigue allowing the rider to utilize the available power more efficiently.

The addition of the Ergolock seat also aided in a redesign that now offers added wet storage under Sea-Doo’s exclusive removable watertight storage bin for over three times more storage capacity than the previous generation with 162 liters of total storage and a larger glove box. The technical flowing edges of the RXT-X model is complimented by the functionality of the stable and predictable S3 hull with adjustable rear sponsons. The RXT-X 300 watercraft is equipped with race specific features including, digital infocenter with integrated lap timer and boost indicator and high-performance Variable Trim System (VTS). It also features the second-generation iBR adding to the level of rider control with the most intuitive operation and Intelligent Throttle Control (iTC) systems with Touring, Sport and ECO modes. The 2016 Sea-Doo RXT-X 300 model is available in muscle colors of Lava Red and the modern Monolith Black Satin or race inspired White and Dayglow Yellow.

2016 SEA-DOO RXP-X 300
The Sea-Doo RXP-X watercraft is the most decorated performance model in the last five years and is now powered by the new 300-horsepower Rotax 1630 ACE engine offering the industry’s best power-to-weight ratio performance. This new, stronger, bigger and more efficient engine takes the RXP-X 300 model to the next level as the industry’s undisputed king of performance fun. The Rotax 1630 ACE power package provides greater mid-range power for better cornering speed and produces over 1G during acceleration from a stop. 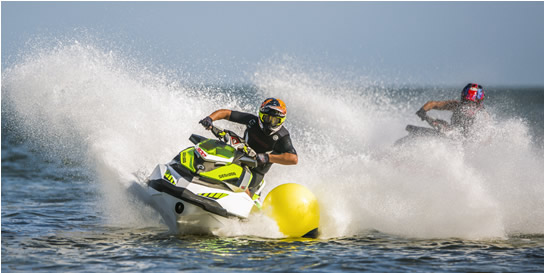 The T3 hull design allows the RXP-X 300 model to aggressively lean into corners and penetrate chop better than any of its two-seater counterparts. T3 stands for “tight-turning t-hull” and uses an advanced, dual running surface hull design with a unique combination of soft and hard chines, adjustable rear sponsons and performance trim tabs. The T3 hull combined with the Ergolock system allows the rider to lean further into corners, using more of the available power, with greater confidence and less effort to turn tighter and faster.

The Sea-Doo RXP-X 300 also receives the new handlebar grips with palm rest and intuitive second-generation iBR enhancing the level of rider control to complete the most intuitively controlled two-seater in the high-performance segment. The Sea-Doo RXP-X model has set the standard for precise handling and in 2016 is available in Lava Red and the modern Monolith Black Satin coloration or race inspired White and Dayglow Yellow.

2016 SEA-DOO GTR 215
The 2016 Sea-Doo GTR 215 model is arguably the most versatile performance model in the industry by lowering the barriers for enthusiasts to enter the Sea-Doo performance family with more technology and flexibility than comparable competitor watercraft at an affordable price.

The GTR 215 model is the preferred model of choice for 250 class as the reigning AQUAX US 250 class champion3. This model is based on the nimble yet predictable handling of the GTI platform while offering more power from its supercharged Rotax 4-TEC marine engine for a superior power-to-weight ratio. The 2016 Sea-Doo GTR 215 will be spotted in the lead pack in Black and Sunburst Yellow coloration. The GTR 215 watercraft is also fully equipped with the Sea-Doo iControl technologies including the iTC and second-generation iBR system, allowing the rider to reduce the stopping distance by close to 48.75 m (160-feet) for greater peace of mind. The Sea-Doo GTR 215 features: integrated infocenter, high-performance VTS and 116.6 liters of storage.

About BRP
BRP (TSX: DOO) is a global leader in the design, development, manufacturing, distribution and marketing of powersports vehicles and propulsion systems. Its portfolio includes Ski-Doo and Lynx snowmobiles, Sea-Doo watercraft, Can-Am all-terrain and side-by-side vehicles, Can-Am Spyder roadsters, Evinrude and Rotax marine propulsion systems as well as Rotax engines for karts, motorcycles and recreational aircraft. BRP supports its line of products with a dedicated parts, accessories and clothing business. With annual sales of over CA$3.5 billion from 107 countries, the Company employs approximately 7,600 people worldwide.

Welcome to the meeting place for all jetski, waverunner, personal watercraft enthusiasts. Whether you are brand new to the thrill of owning and riding the latest wickedly fast watercraft or finally seen the sense of using your jetski watercraft to join the growing number using it for fishing, a long time owner who has followed the transition of jetski watercraft from 1 person standups to 300+hp family runabouts, a seasoned racer who lives for the adrenalin rush of competition or you just enjoy pottering around your local bay or river OZPWC welcomes you. We are lucky to live in the best part of the world with a coastline the envy of the world. We support the safe use of PWC and encourage everyone to have respect for everyone enjoying the outdoors whether they are on the water or not. We are proud to have the support of Yamaha Waverunners Australia, BRP Sea-Doo Safe Rider Program and Kawasaki Motors Australia in bringing you up to date news, jetski racing and information from the jetski world as it relates to our part of the world in Australia. Do also make sure you join us on Facebook and Instagram (search OZPWC) as we often make updates there when we update the website. Thanks for visiting !!