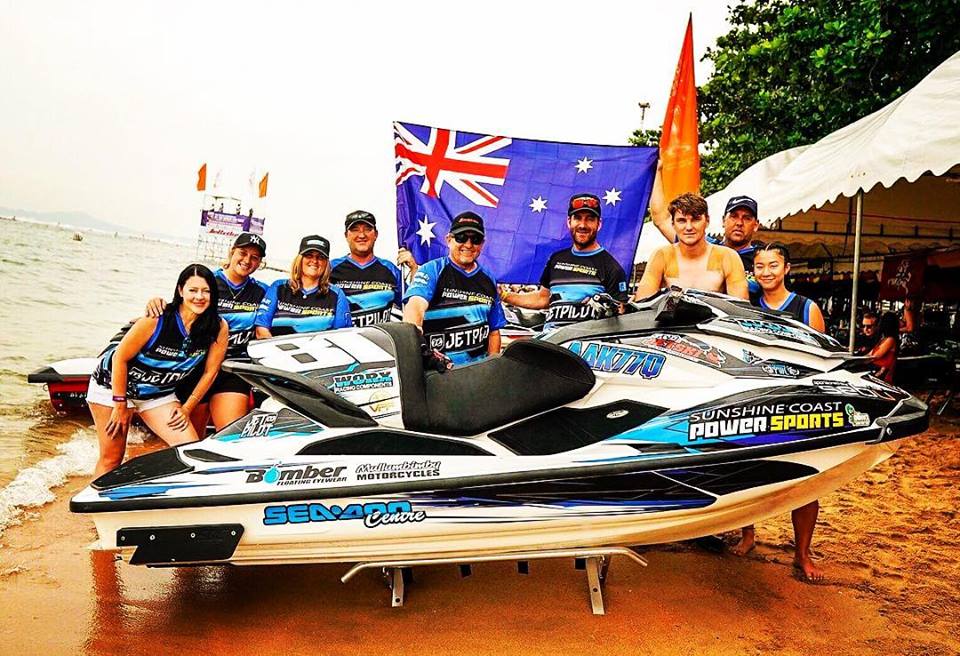 Jetski Worldcup 2018 complete for another year and what a drama filled event it was with mechanicals costing Aussie favourite Kevin Reiterer (Austria) a likely chance at scooping the 45k prizemoney in Pro Ski GP after retiring in moto 4 while battling in the top 3 with a points advantage on his side. France’s Raphael Maurin took the title over Belgium’s Quinten Bossche.

In Pro Runabout GP Japanese rider Isahai looked to have it in the bag with a huge points advantage going into the final moto but disaster struck on the first lap with mechanicals and suddenly the prizemoney was there for the grabbing and it looked to be Qatar’s Waleed Alshasharni in the drivers seat with Denmark’s Marcus Jorgensen also in the hunt, the latter on a charge through the pack to take a well deserved win. But the drama was to continue with Waleed pre-empting official results at the conclusion grabbing the Qatar flag after concluding the points tally was his but his joy was short lived with official results docking him for a missed buoy handing the World Cup win to the broken down Isahai by just 2 points, his 2 wins, a third and tenth giving him the title. A hard fought first premier class King’s campaign by Queenland youngster Bailey Cunningham saw him garner 8th overall in a baptism of fire that saw him manage a few offs but managing to complete all 4 motos, the highlight being a 5th in moto 2. Greenland took 4th overall moving up a spot on his 5th from last year.

In Pro Runabout 1100 Open a dissapointing but promising outing for the Jet Powered Spark turbo of Scott Phillips/Rob White Scott blowing the pump off the back of the ski 15 metres into Moto 1 and then in Moto 2 having to contend with a dead engine start he made his way up to 6th from 16 and then snapped the drive shaft so he was done after day 1 with points scored in only moto 2 for 15th overall. Definitely no shortage of power in this new Jet Powered Spark and this will be one to watch for the future.

Queensland’s Seb Birch was back for another year at King’s this time having a crack at Pro-Am Runabout Open in a field dominated by the Chinese rider Wu Rong Hua who won all four motos. Seb’s best result was in moto 3 with a fourth place, finishing all 4 motos for a well deserved 6th overall.

In Pro Am Womens Ski Limited New Zealander Kylie Ellmers took 7th overall finishing all 4 motos with a best 4th in moto 3. Japanese rider Tanaka took the win with Sweden’s Jonna Borgstrom second and Japan’s Okano in third. Worthy of attention too was 10x Womens World Champion in the 90’s and early 2000’s Tera Laho (USA) back out of retirement for a crack with the youngsters and a well deserved 5th overall with a couple of 3rd places opening a few eyes.

USA’s Pro Freestyle gun Mark Gomez backed up his win here last year with another for 2018 but it was extremely close up the top of the table with Japan’s Yamamoto within a whisker on both his runs to missed out by just 0.1 points in his final points tally to Gomez. I’m not sure I agree with the way the points are translated into the traditional 20-17-15-13-12-11-10 scoring on each day instead of just combining their best individual scores for each day, results would of been the same but this method would at least make it a lot easier for riders to come from behind to take the overall.

In Endurance Open Thailand’s Teera Settura took the win on a countback with last years winner Pastorello from France with Japan’s Hiroyuki Wada in third. A great effort from our own Kylie Ellmers who managed 5th overall dealing with a stretched steering cable in moto 2 that cost her time. Queenslander Brett Douglas was unlucky with mechanicals in moto 1 and 2, the latter while leading the pack – he showed the great speed and talent we all know are there.

In the Amateur and Junior classes well done to Tom Aiken in Amateur Ski Kawasaki 1500 Stock with 3 fourths and a second giving him 4th overall in a tough class of 12 with some tough competition from eventual winner Singurai from Thailand and UAE’s Alhammadi.

Dean Krouskos had his first taste of international comp in Junior 14-15 Ski 2-stroke stock completing all 4 motos for 8th overall in a class dominated by the USA’s Julien Beaumer who won all 4 motos. 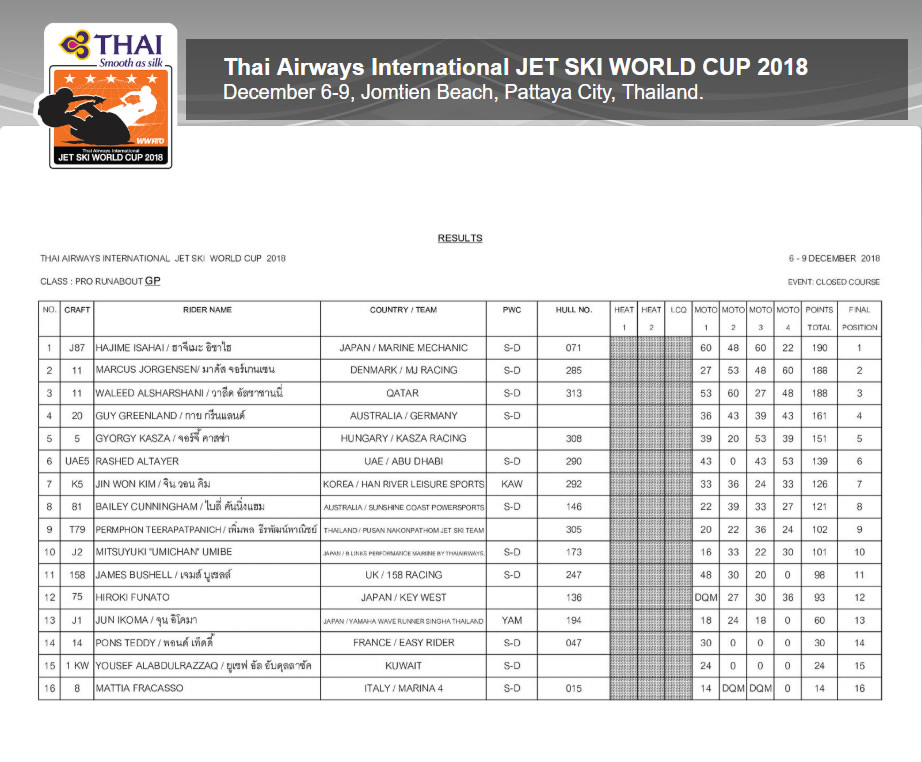 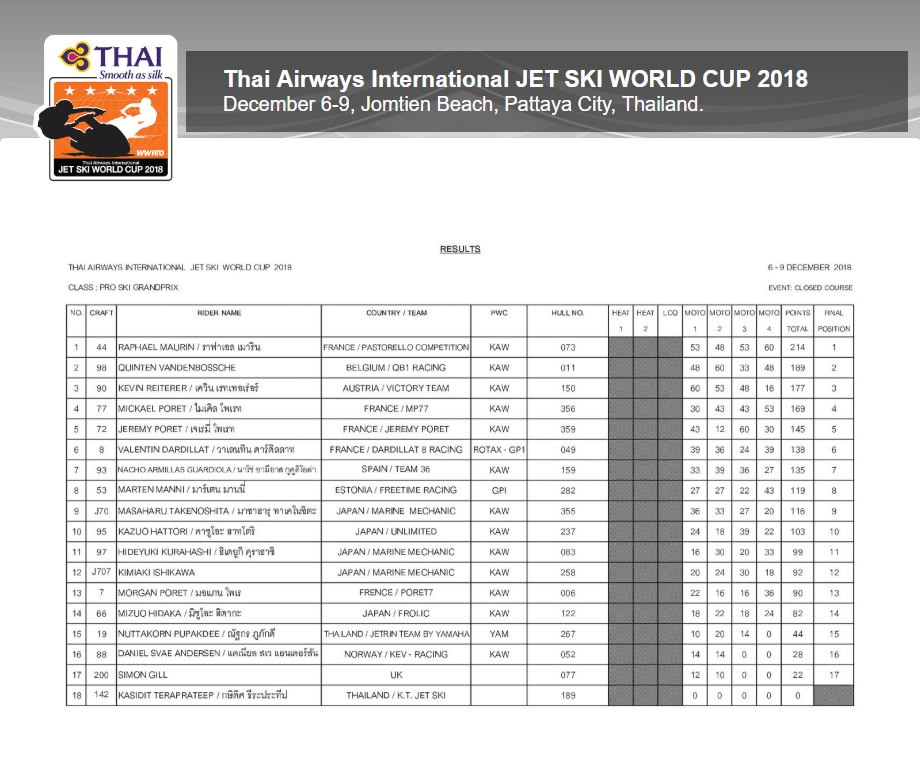 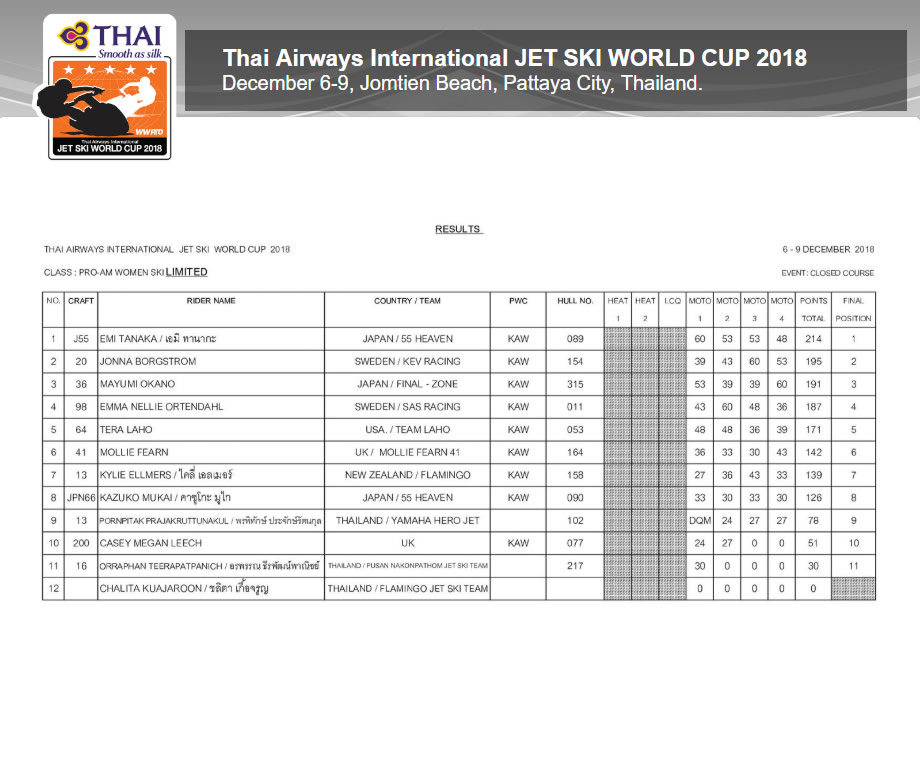 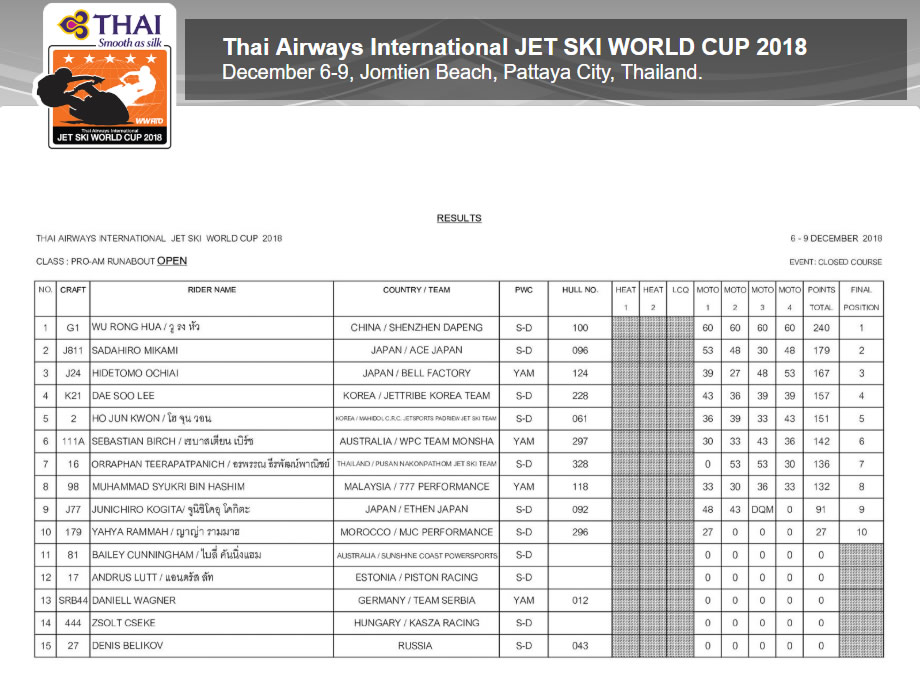 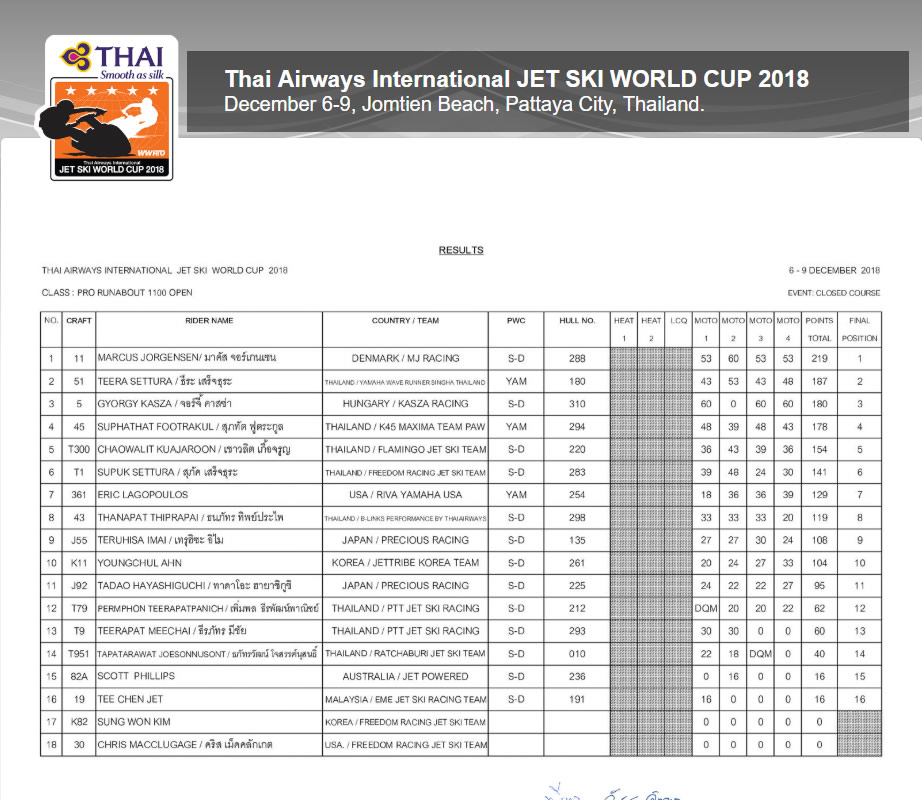 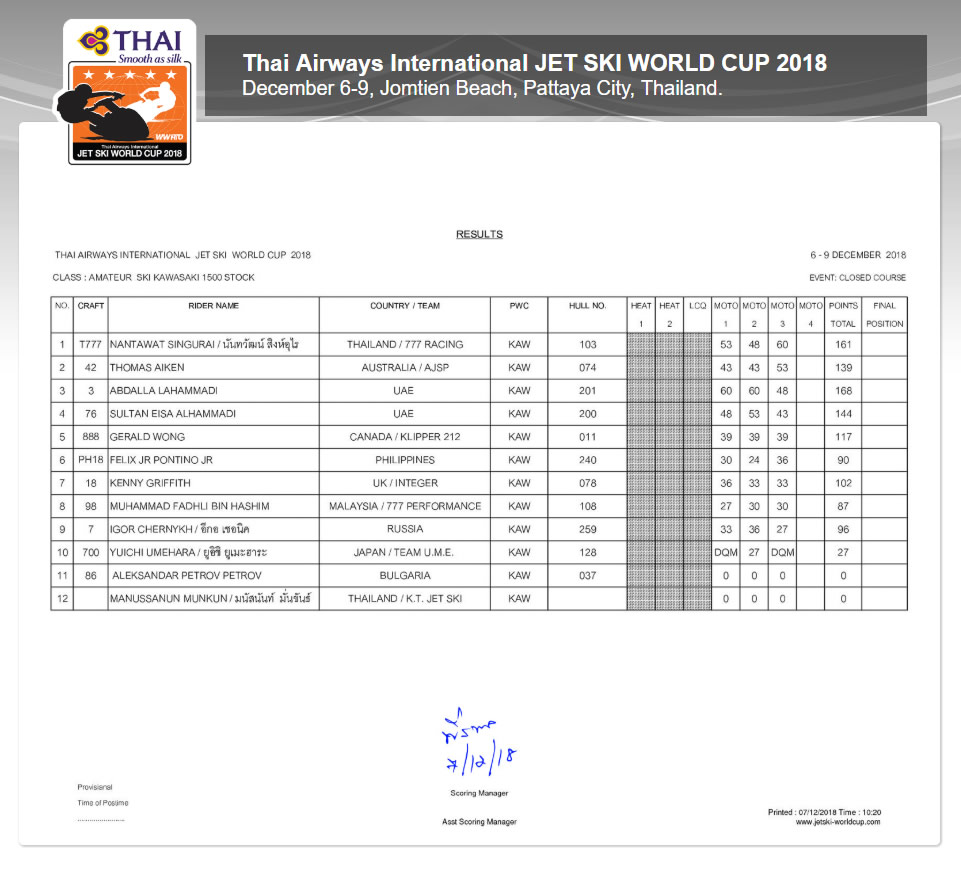 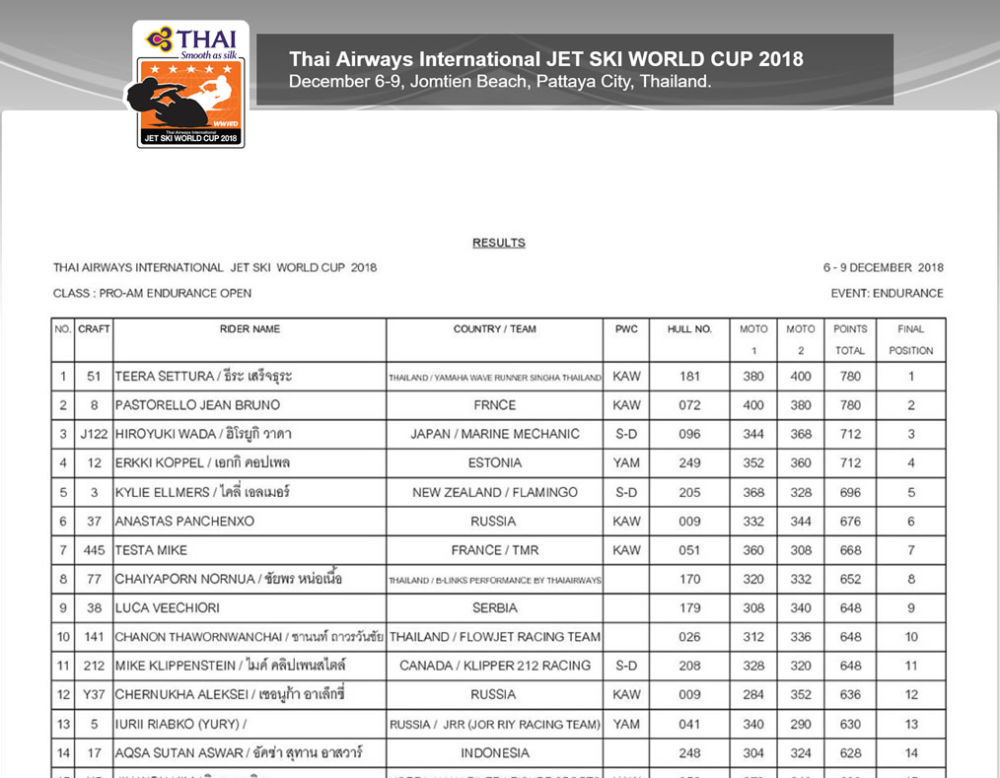 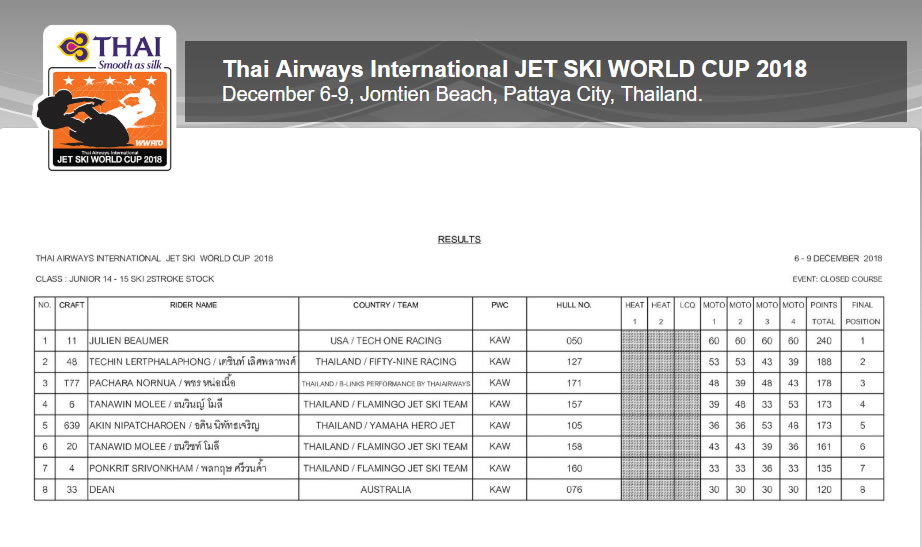 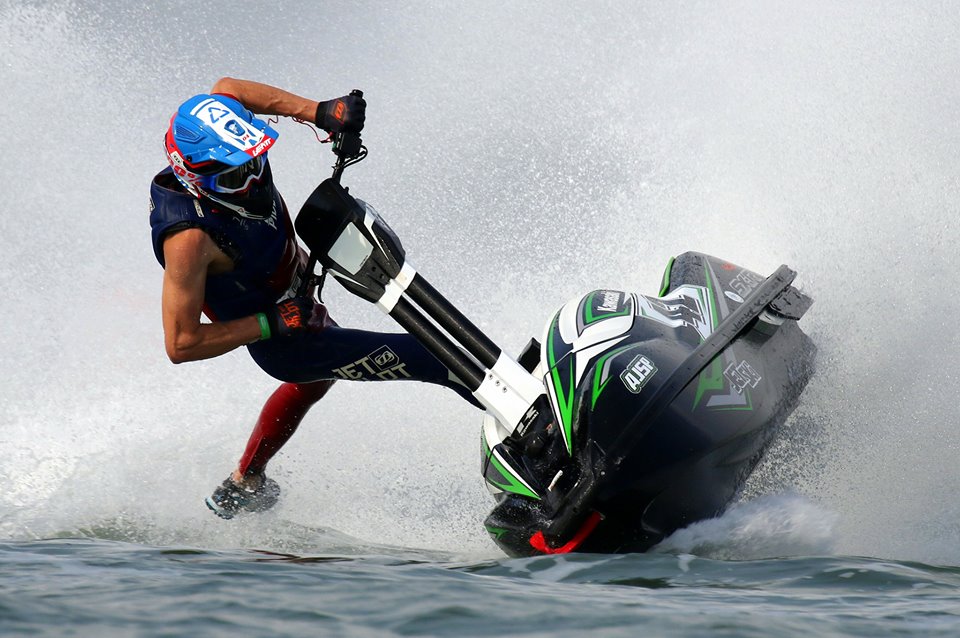 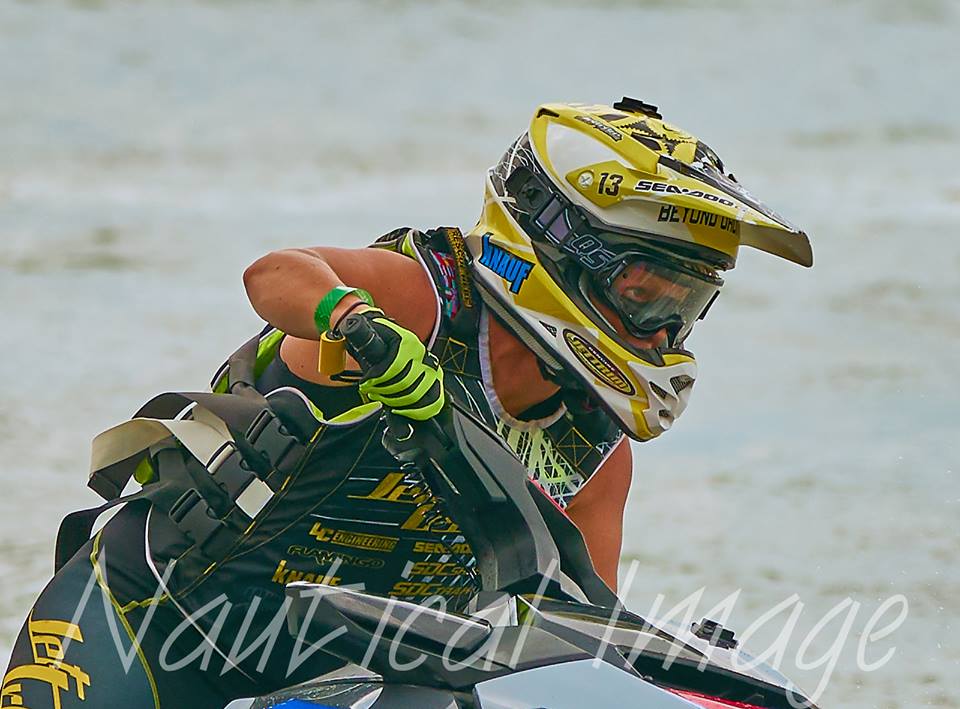 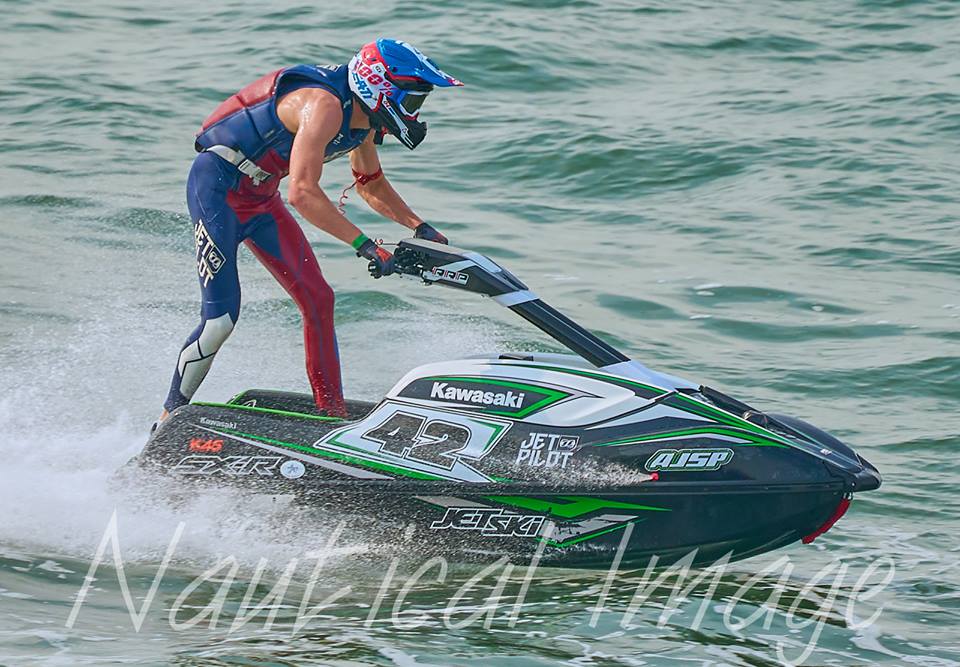 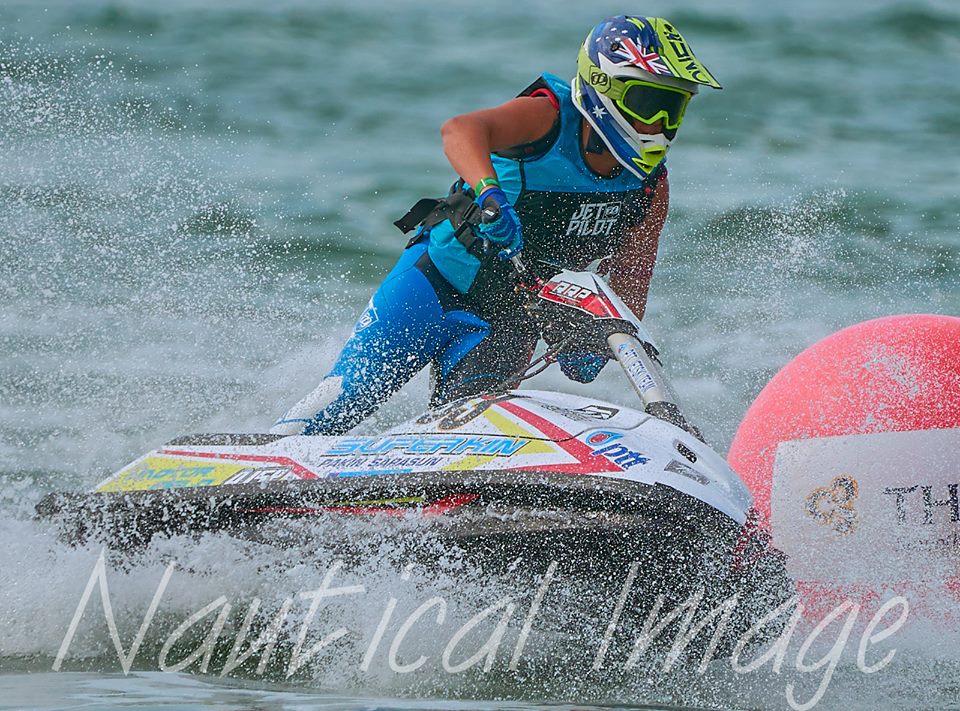